All Hail the ‘Sun King’ (Aralia) 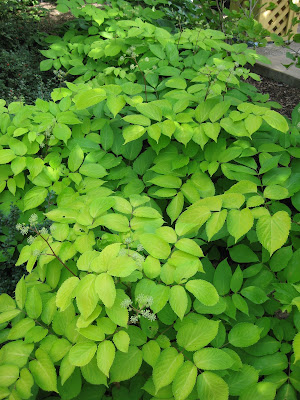 We had some light snow this morning but not enough to be noteworthy.  The weather is cooler and while we had a warm, sunny day yesterday, the layer of ice over most of the gardens continues to exist and be dangerous.  Big John and Larry continued processing lights inside while Alan headed out in to the gardens to bring in more elements from the Holiday Light Show (HLS).  The HLS is coming in nicely organized and both John and Larry are on top of keeping the process flowing well.   Dr. Gredler was in for painting and Gene did some staining on a new potting bench.  Dave, Vern and Jim continued their carpentry projects and Dick H. repaired some electrical issues with our truck and trailer; both of which will go mobile Thursday to head up too Madison for WPT Garden Expo set-up.  We’re looking forward to our involvement at this well attended event at the Alliant Center Exhibition Hall.  See www.wigardenexpo.com/ for more details on this event.  We’re selling advance tickets for this event at our Cottage Garden Gallery.  Janice worked on myriad projects including research on some 2016 collections.  Kay was in to process handouts for the Garden Expo as well.  We also saw Karen M., Carrie A., Rollie, Karen B. and many others today.
I continue to be a huge fan of the ‘Sun King’ golden Japanese spikenard (Aralia cordata) that is seen prominently in this blog.  We planted our first specimen back in 2011 and it continues to thrive in a shady location.  We have the green form (“straight species”) in a couple of other locations and it gets enormous!  I’ve seen it 8′ tall.  This species is native to Japan, Korea and east central and southern China.  This golden selection was found by plant hunter, Barry Yinger and continues to show hardiness well in to zone 3.  The ultimate size of ‘Sun King’ is still in question but I’ve now seen it over 3′ tall and think it will get bigger.  With some dappled sunlight, the compound leaves will continue to be bright gold over the summer.  The most vivid coloration is in early spring and in fall.  In deep shade, the plant looks chartreuse which is still showy.  Specimens in full sun may get a bit “washed out” with whitish leaves and are prone to leaf burn without adequate water.  The last couple of photos below show ‘Sun King’ in lots of light where it still thrives.  The reddish stems are nice and the racemes of tiny white flowers in late summer are showy and attract bees.  Younger specimens wont flower for a couple of years.  The flowers later become small dark maroon berries (see below).  This plant is also considered deer resistant which has been the case at RBG as well.  Oddly enough, the young stems and root shoots are edible (hence the other name of “mountain asparagus”) and have a long history of consumption in Asia.  Research proper preparation though as it is not insignificant prior to consumption if desired! The photo at the top was taken at the Morton Arboretum (Lisle, IL) and the photos below have some captions that help describe when (and where) the photos were taken.  I love this plant for adding bold “illumination” in the partly shaded garden. Seek out the ‘Sun King’! 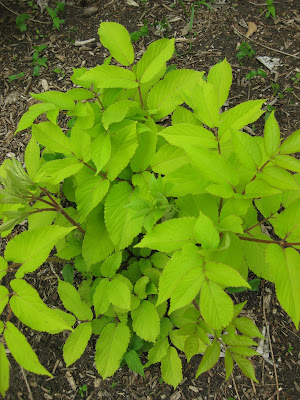 spring growth of Aralia cordata ‘Sun King’ is extremely vivid! (above and two below) – note the red stems 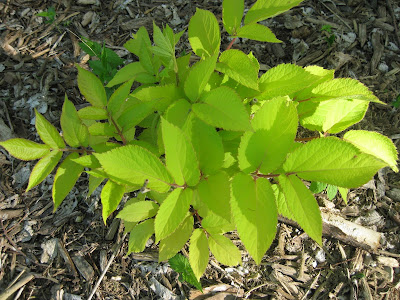 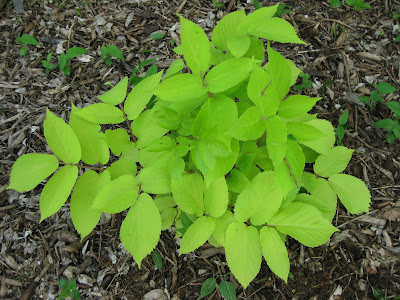 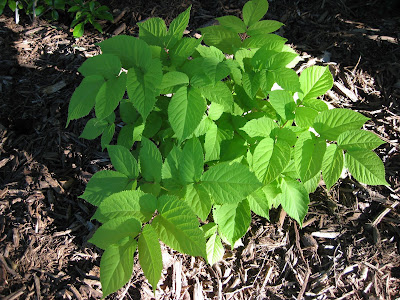 ‘Sun King’ is still a nice chartreuse in shade (above) 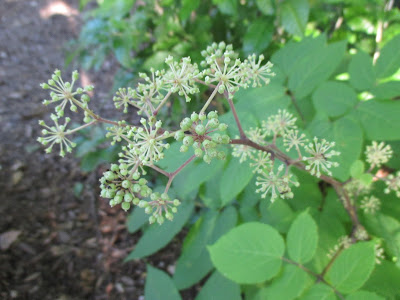 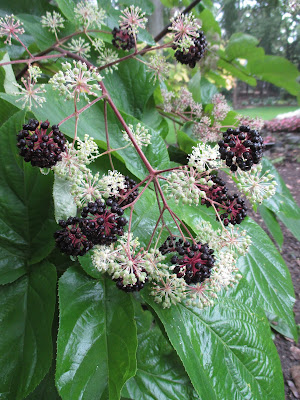 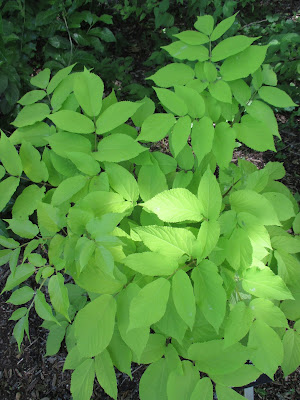 our four year old specimen of ‘Sun King’ is already 3′ x 3′ and I hope it will get bigger! (above and below) 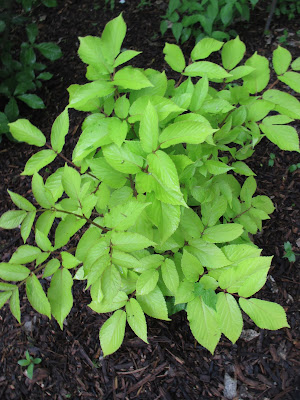 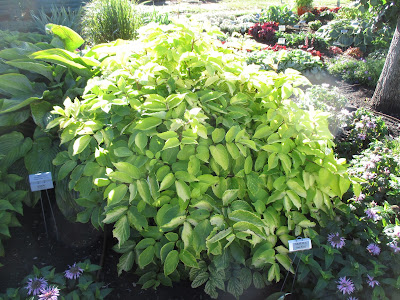 Aralia cordata ‘Sun King’ at Walters Gardens (Zeeland, MI) already 3′ tall and 5′ wide (above) in quite a bit of sun 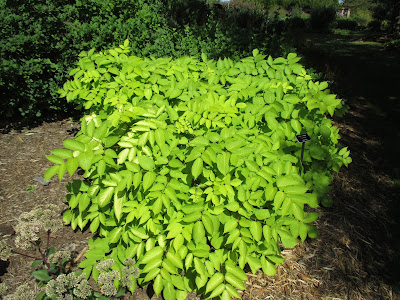 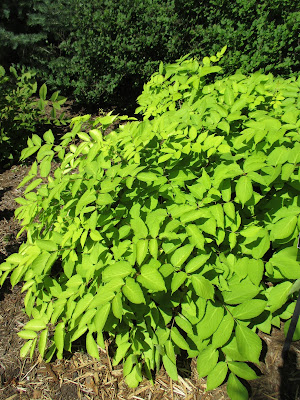