Nice to See the Sun! 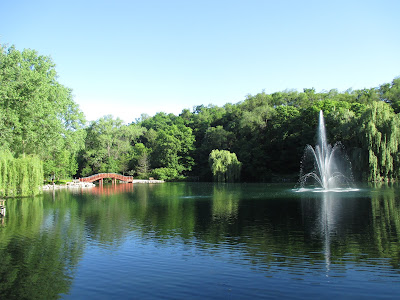 Today was a beautiful day with ample sunshine.  We think we had over six inches of rain over the past four days so we were happy to get out in the garden although it was quite soggy still in many locations!  The photo above shows our placid pond with arched bridge and fountain in the distance.  With a chance of rain over the next couple of days, we took full advantage of the weather for more tidying and planting.  We also did quite a bit of mowing and were happy to see lots of visitors out in the gardens.  We had an excellent volunteer turnout and the ground staff accomplished a diverse and significant amount of projects!  Below are more photos from the gardens today. 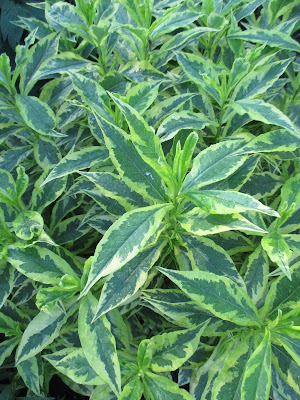 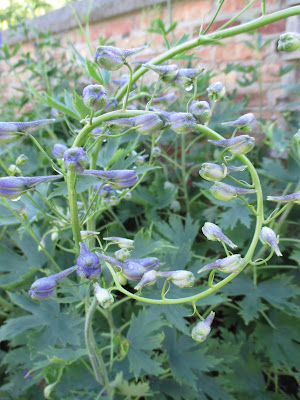 this delphinium (Delphinium sp.) was bent over in the rain and hasn’t straightened up yet! 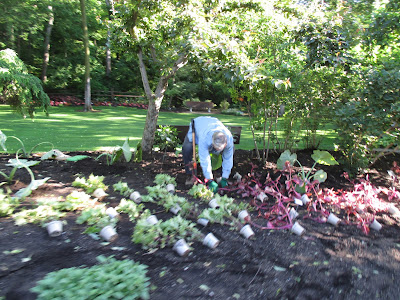 We had a nice turnout of volunteers with everyone enjoying the great weather.  I placed plants immediately and Pat (above) started planting early this morning and was later joined by Barb (fourth photo down).  Vicky (directly below) did a nice job tidying up two large areas that needed their bulb foliage removed and weeds addressed as well.  She brought back many loads of debris.  The second and third photos down show Kathy and Eva respectively as they did a great job hoeing out weeds from two areas that we started planting later in the afternoon with help from Shirley (ninth photo down).  The ladies did a great job.  Vern was in (fourth photo down) for some carpentry work and we saw Jim D., Dick H. and Ron R. stop by as well.  Dr. Gredler and Bill O. were both in for mowing.  The sixth photo down show Kay (left) and Barb posing nicely by a beautiful clump of Martagon lilies (Lilium martagon).  The seventh photo down shows (left to right), Hal, Magda and Doris.  All three did a great job helping plant today.. Dr. Yahr and his daughter Lynn can be seen in the eighth photo down.  We also saw Maury (lots of errands), Mark S., Mary W., Elsa and many others today. 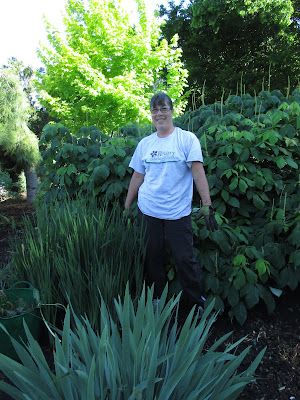 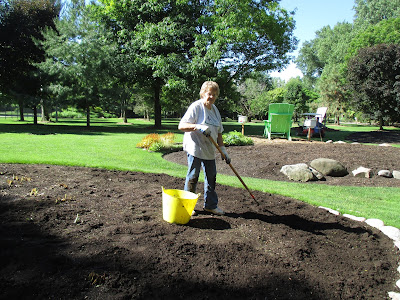 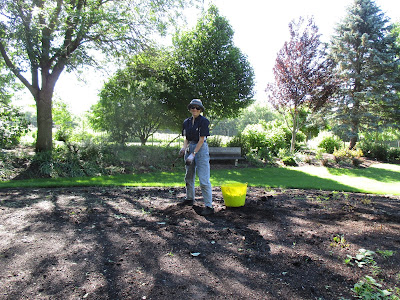 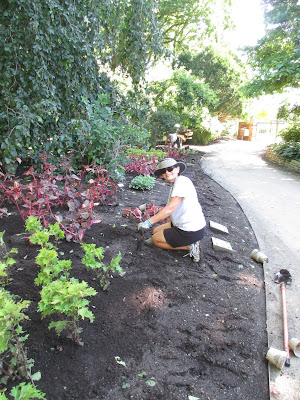 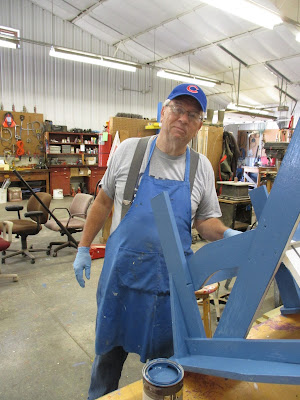 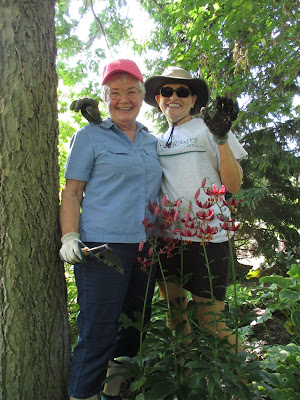 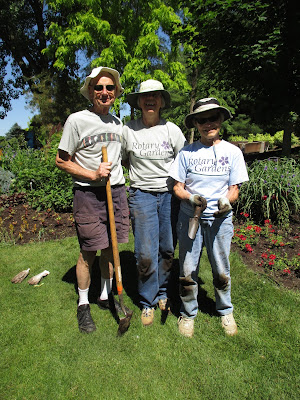 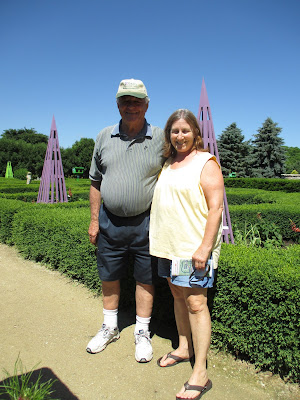 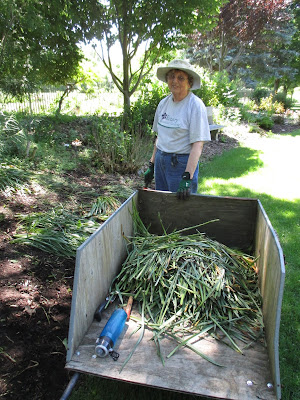 The grounds staff had a busy day.  Nolan (day 2) was trained in mowing, watering and weedwhipping.  He did a nice job mowing today and worked on cutting back daffodil foliage in the Potter Daylily Collection.  Larry also had some mowing, water feature work and a wide range of other tasks.  Big John edged, rototilled, prepared areas for seeding (conversion to turf) and had many other projects.  Cindy hauled out the Elephant Ear Collection which was later planted by Barb.  She also worked on some watering, weeding and general tidying in multiple areas.  Cheryl focused her clean-up efforts near the zig-zag bridge and also did some planting.  Janice worked on signage, gardening, the cutting display and other tasks.  I was able to haul out plants most of the day which was time well spent!  Below are more photos from today. 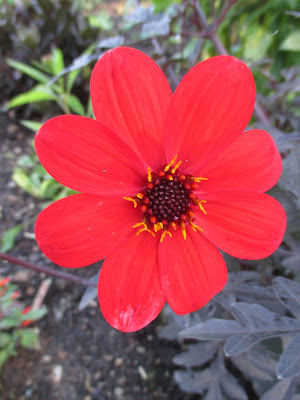 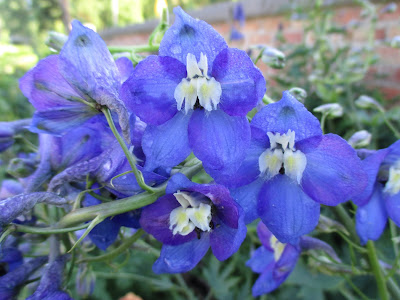 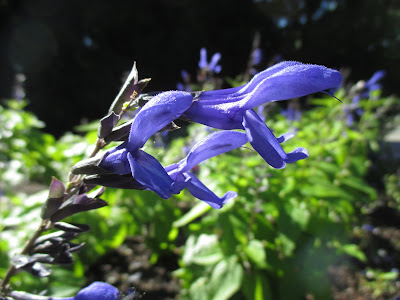 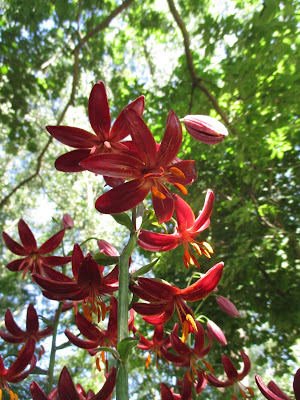 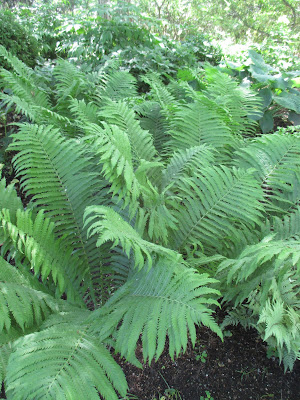 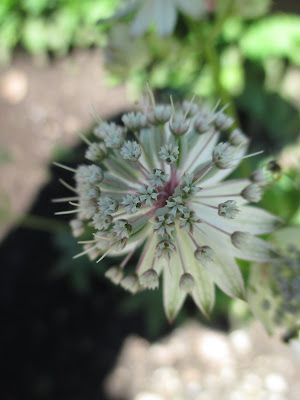 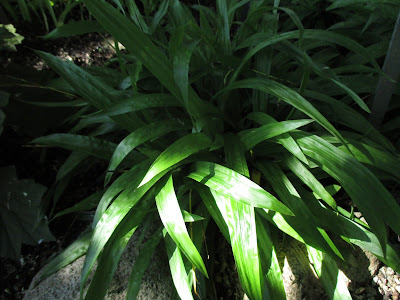 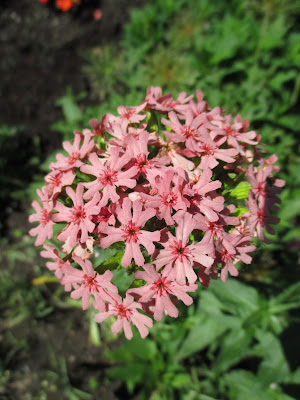 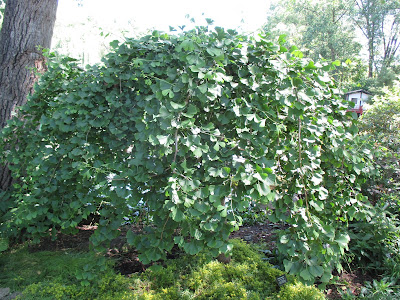