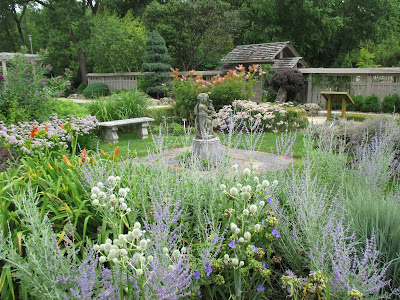 The weekend saw some heavy winds and driving rain on Saturday afternoon and we spent quite a bit of time today cleaning up the gardens.  Thankfully, there were only a few large branches down but plenty of debris to collect.  The gardens still look great (see above) and are transitioning to mid-summer quite nicely.  We had to do very little watering today as we’ve had consistent precipitation and the cloudy sky helped as well.  We had an excellent turnout of volunteers today and the staff dove right in to a wide range of general gardening tasks.  All the photos in this blog were taken throughout the day. 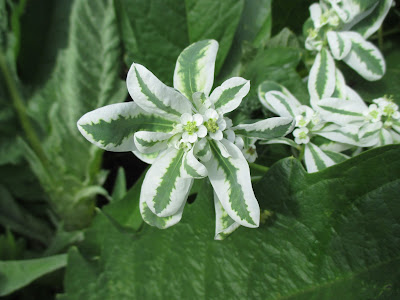 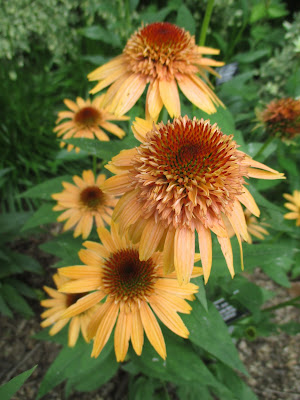 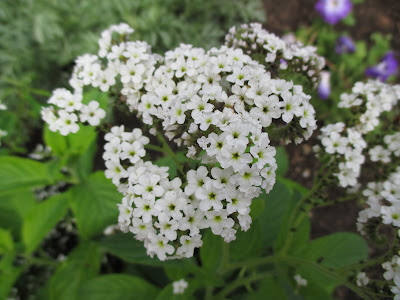 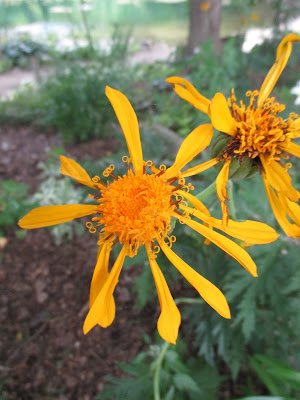 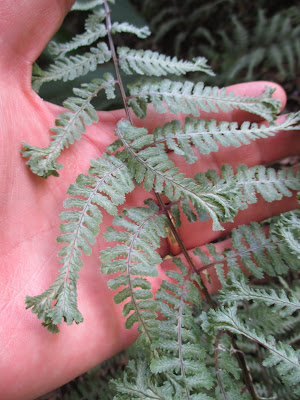 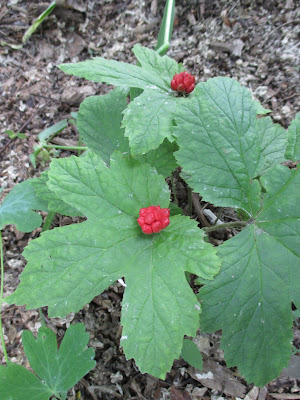 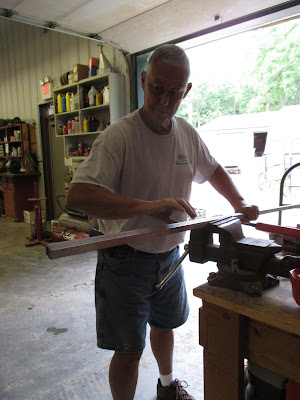 Our volunteers worked on a wide range of tasks today.  Dick P. (above) was cutting more strap aluminium for our plant signs and Gary was in to continue on our labeling.  Maury ran lots of errands for us and Dr. Gredler did his mowing rounds.  Alan (purple boy below) did an excellent  job weeding, mulching and ultimately collecting washed out rock and gravel from the gate area by the gazebo garden.  Larry H., Lloyd and Ron R. went on post-storm duty and did an super job tidying up paths and patios after the debris-laden weekend.  Dick H. ran to the dump and worked on some other projects.  Ron Y., Dave, Bobby K. and Jim continued work on the obelisk assembly line in the Horticulture Center.  Kathy (second photo down) and Eva did a nice job weeding in the Alphabet Jungle Garden while Mary D. weeded in the formal annual sections.  Pat M. worked on path tidying as well and fixed a damaged umbrella from the weekend.  Ed (third photo down) continued re-graveling one of our primary paths.  Shirley H. (fourth photo down with her druid twin) did a nice job weeding in the Scottish garden and reception garden.  Rollie was in for some mowing and Lisa I. stopped by to meet with me as we assessed the Potter Daylily Collection.  We also saw Joe M., Marcia L. (English cottage garden) and many others today! 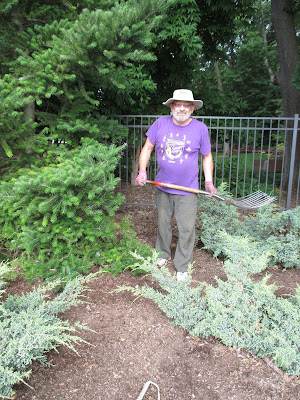 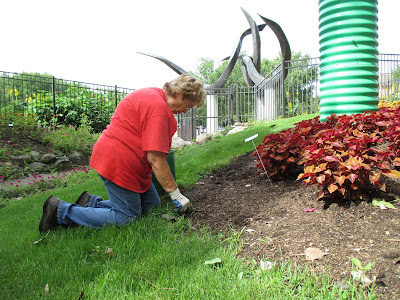 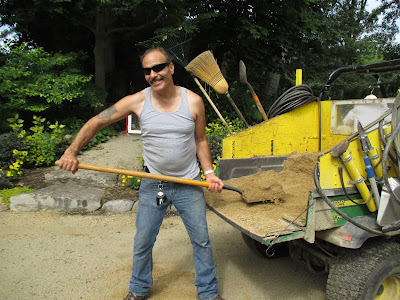 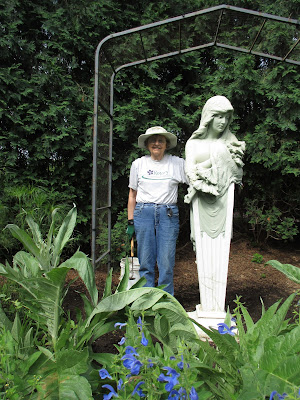 The grounds crew had a great day.  Larry checked over the gardens and spent time draining and cleaning the sunken garden water feature.  We do this a couple times annually.  Terry checked over the paths and Alphabet Jungle Garden for some post-storm concerns and then moved on to some serious yew (Taxus sp.) shearing in the formal gardens as well as container watering.  Cindy progressively tidied from the front entrance garden to the terrace garden and will continue work tomorrow in the Smelly Garden theme of the Nancy Yahr Memorial Children’s Garden.  Nolan did a nice job with gravel path upgrades and had some late day fertilization too.  I was able to get out in the gardens for a tour and started installing the backlog of woody plant labels that need to go in the gardens.  Great day had by all! 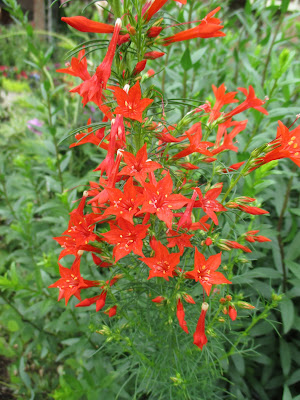 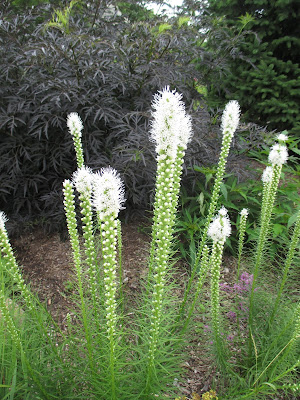 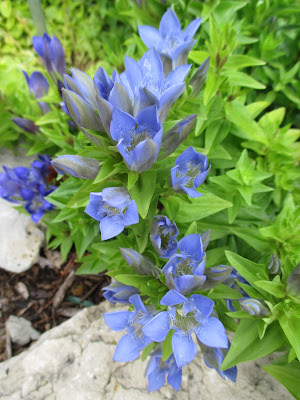 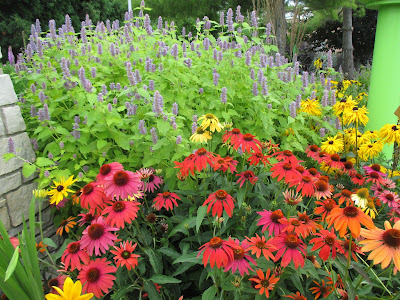 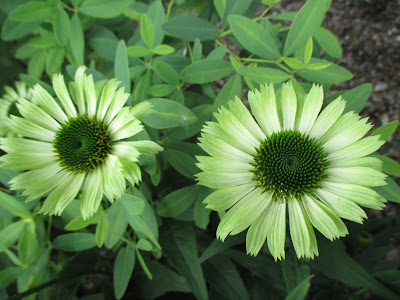 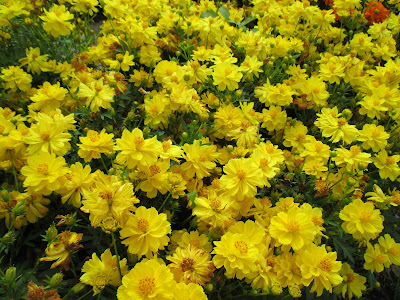 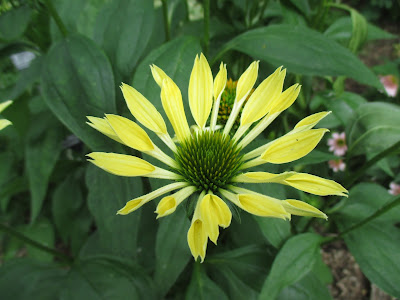