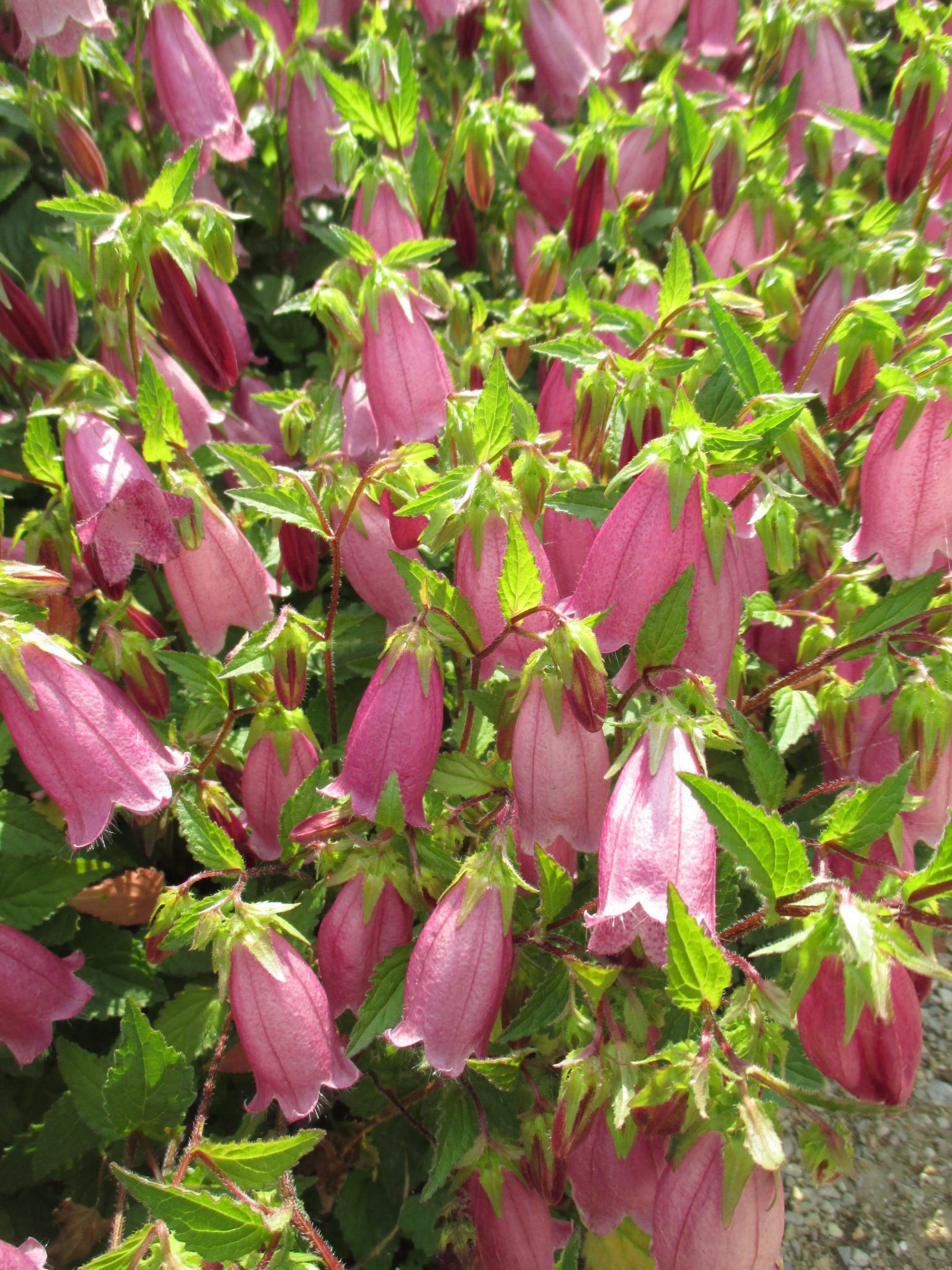 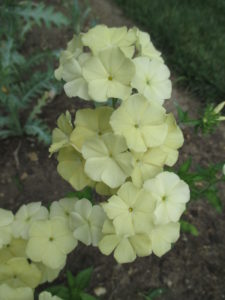 Today ended up being another hot one with temperatures tickling the 90 degrees F mark.  We were all pretty beat by the end of the day but we have some tough volunteers and grounds staff for sure!  An interesting annual phlox (Phlox drummondii) can be seen above in a shade I’ve not seen in the past…this is a creamy/lime and is one of our over 100 selections in the Heirloom Garden (see sign below) which replaces the Thomas Jefferson Collection of the past two years.  This historical collection features and interprets pre-1900s annuals, vegetables, herbs and perennials in orderly rows near the arboretum.  Some Victorian-era bedding schemes were also developed in two of the thirteen original beds.  Patrea, Janice, Maryann and Tom K. have done a nice job with this space and additional signage will be installed shortly to maximize the educational impact of this space.

Our grounds staff had plenty of watering today. Our threat of a morning thunderstorm materialized and literally lasted 15 seconds.  That was it!  Glad we had sprinklers going as that 1″ of rain from last week is ancient history.  Cindy watered, weeded and continues with her “primping kung fu” in the Hummingbird Haven which will likely be one of our most popular (and colorful!) gardens this year.  Cindy also hand watered this garden which is no small task.  Terry had sprinklers going everywhere and found time to water containers and shear a whole bunch of shrubs.  Trevor worked on hauling plants, watering, fertilizing and was joined later for planting by Nolan who also watered and fertilized in multiple locations.  I hauled more plants out for installation and played with our irrigation system to help streamline our watering during the evening hours. 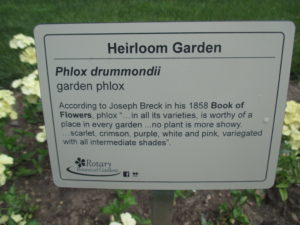 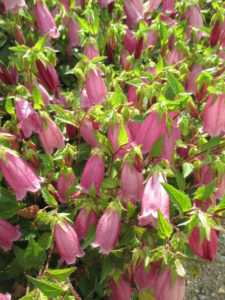 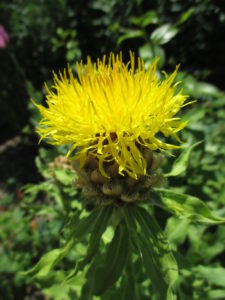 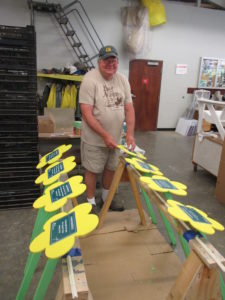 Our volunteers were again a vital asset today.  We had volunteers helping out in the gardens and at the Horticulture Center.  Steve (above) was working on these “hummingbird factoid” signs (developed by Cindy and printed by Gary) for the Hummingbird Haven theme in the Nancy Yahr Memorial Children’s Garden.  Kathy and Eva continued weeding and tidying as did Stan and Kristin (in the Japanese garden).  Dr. Gredler and Rollie were out mowing.  Ron R. and Lloyd worked on a large mulching project and Alan continued to maximize our “curbside appeal” along Palmer Drive with his vigilant weeding and tidying.  Directly below are (left to right) Jim, Vern, Dave and Ron Y. repairing and rebuilding our garden carts.  Pat C. (second photo down) helped prepare letters to go out to our Photo Contest participants as the winners have been selected and their photos will form the backbone of our 2017 RBG Calendar (prepared by Lisa I.) which should be available by mid July!  Maury ran many errands (including getting fuel) and Dick H. had some projects as well.  Dick P. continued work on some concrete forms/bases for memorial signs and we also saw Marv B., Gary, Larry O. (lots of watering and much more) and many others including Polly, Marleen, Peg (labeling work), Bev D. (label work), etc.  Marcia and Mirjam did a great job tidying and planting in the English cottage garden.  Some of these new plants replaced previously nibbled selections (presumably a woodchuck with very good taste). 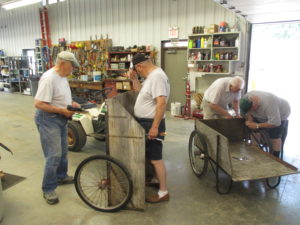 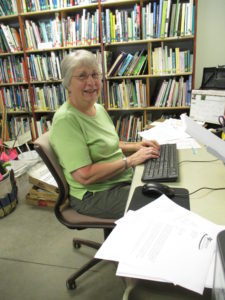 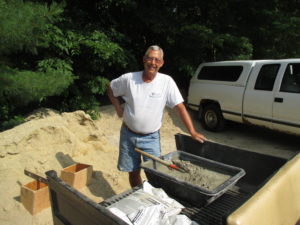 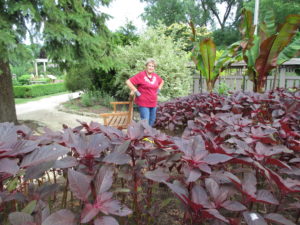 Kathy P. in a sea of amaranth 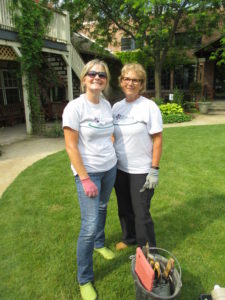 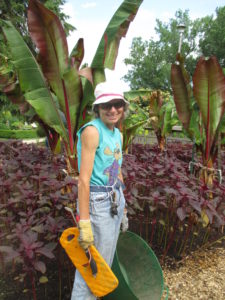 Eva (above) with bananas and amaranth 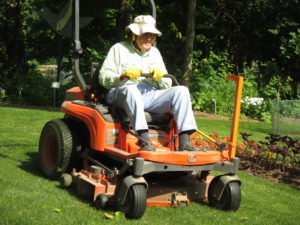 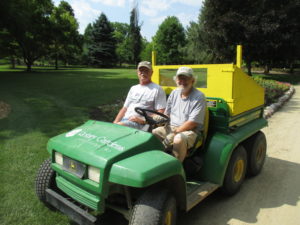 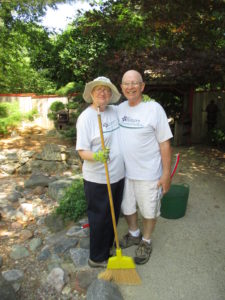 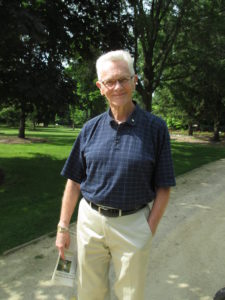 Special Thanks to Gary Smith (above) who is on his fourth round of being Interim Executive Director!  In one month, since taking over, Gary has provided the leadership, direction, support, organization and improved morale that was sorely lacking since last fall. 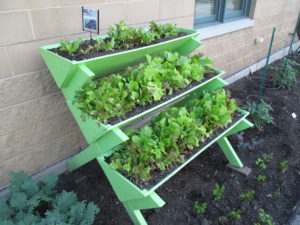 cool raised planter (built by the Grumpies) with lettuce (Lactuca) 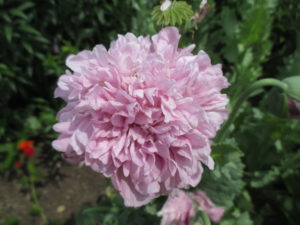